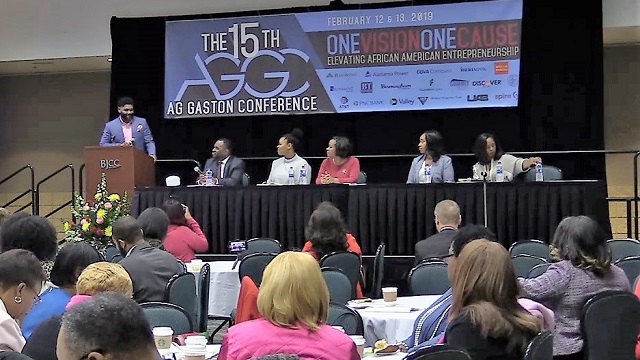 “It’s about building an ecosystem that enables people to thrive,” declared Anthony Hood. “It takes partnerships between universities, the corporate community, nonprofits and elected officials. That means cooperation and, in Birmingham, we’ve never seen the level of cooperation that we’re seeing today.” 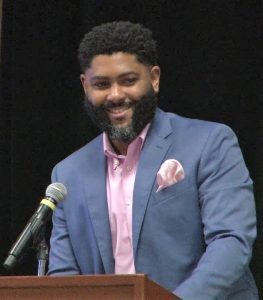 Hood is director of civic innovation at UAB, and his comments came in the introduction of a panel on that topic at the 15th annual A.G. Gaston Conference in Birmingham. The conference bears the name of the late entrepreneur and philanthropist who was a grandson of slaves and built a business empire in the segregated Birmingham of the mid-20th century. By the time of his death in 1996, at the age of 103, Gaston had long been hailed as one of Alabama’s greatest citizens.

The 2019 edition of the conference was devoted to the theme “One Vision, One Cause: Elevating African-American Entrepreneurship.” That theme reflects the current attitude in Birmingham, a city that is enjoying what numerous speakers referred to as a “renaissance” as it continues to emerge as a center for technology-related business growth.

Hood’s civic innovation panel picked up on that theme. But the discussion also stressed economic and social gaps that must be addressed to ensure the presence of a workforce to support Birmingham’s continued growth. 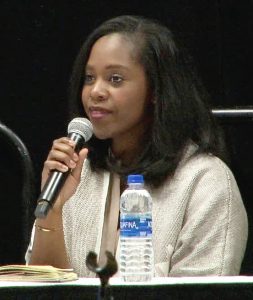 “We have to be honest about the context in which we’re working,” said Kellie Clark, director of operations for Innovate Birmingham, a public-private partnership tasked with fostering inclusion and delivering increased economic prosperity. Clark said one aspect of fulfilling the mission of connecting talented people with prospective employers is providing wraparound services that ensure people can take advantage of programs.

“There are gaps in the pathway,” Clark said, mentioning the costs of housing, food and child care as obstacles that can stall or prevent people from developing their talent. “Wraparound services are crucial. If we want to maximize the potential of our workforce, that’s not charity, it’s necessity.” 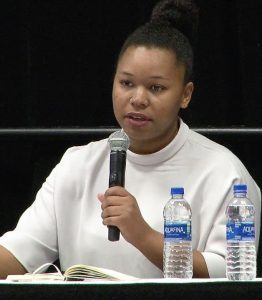 That attitude is part of a comprehensive approach to business attraction and workforce development that will distinguish Birmingham in coming years, said Rachel Harmon, deputy director of talent development for the city of Birmingham’s Department of Innovation and Economic Opportunity. Calling that approach “critical to making sure economic growth is inclusive,” Harmon added that “not a ton of cities have figured out how to do this well.”

“Single-minded approaches to economic development often fail,” Harmon said. “We have to think not just about attracting jobs, but about the quality of jobs we’re targeting. We also have to think about giving people the ability to be entrepreneurs, to create jobs for themselves. We need to make sure that all of those pathways are open.” 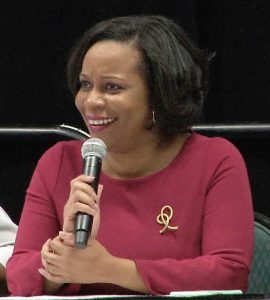 Adrienne Starks is founder and CEO of STREAM Innovations, a Birmingham nonprofit that helps students develop and explore their talents in science, technology, reading, engineering, the arts and mathematics. She said that, regardless of the discipline to which they may be inclined, there is a common thread for helping students excel.

“They’re waiting for us,” Starks said. “It’s up to us to create opportunities for them to express themselves.” 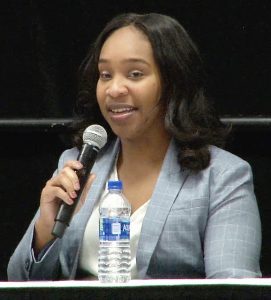 Access is a key ingredient to ensuring young people are positioned to take advantage of opportunities. That’s according to Brittney Smith, who recently left her role as manager of workforce development for the Birmingham Business Alliance to take on a similar position for Birmingham-based Protective Life. Smith stresses the value of networking, as companies sometimes overlook talented potential hires who are “right in their own backyard,” most particularly products of historically black colleges and universities. Making sure that doesn’t happen, she said, is key to optimizing Birmingham’s continued economic growth — and ensuring the local workforce is reaching its potential.

“How can we help companies make sure they’re not overlooking great talent?” Smith asked. “How can we challenge them to be a part of developing a pipeline for diversity and inclusion?” 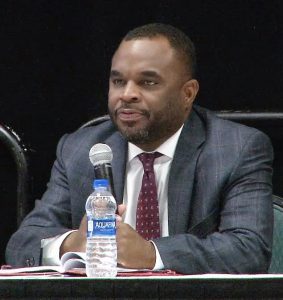 From the corporate side of the economic growth equation, Alabama Power Company’s Ralph Williams echoed moderator Hood’s comments about the fruits of cooperation. He pointed to his company’s partnership with City Hall on “Smart City” initiatives aimed at enhancing public safety, including the recent placement of 21,000 LED lights on poles throughout Birmingham. Beyond such visible improvements, he said, the key is bringing together partners who are “being thoughtful and intentional about the future.”

“This is a wonderful time to live in Birmingham,” said Williams, government and community relations manager for Alabama Power’s Birmingham Division. “We’re only beginning to see the results of what can happen when we’re thoughtful about economic development, about the kinds of jobs we’re bringing to our community, about all of these things that have a positive impact.”