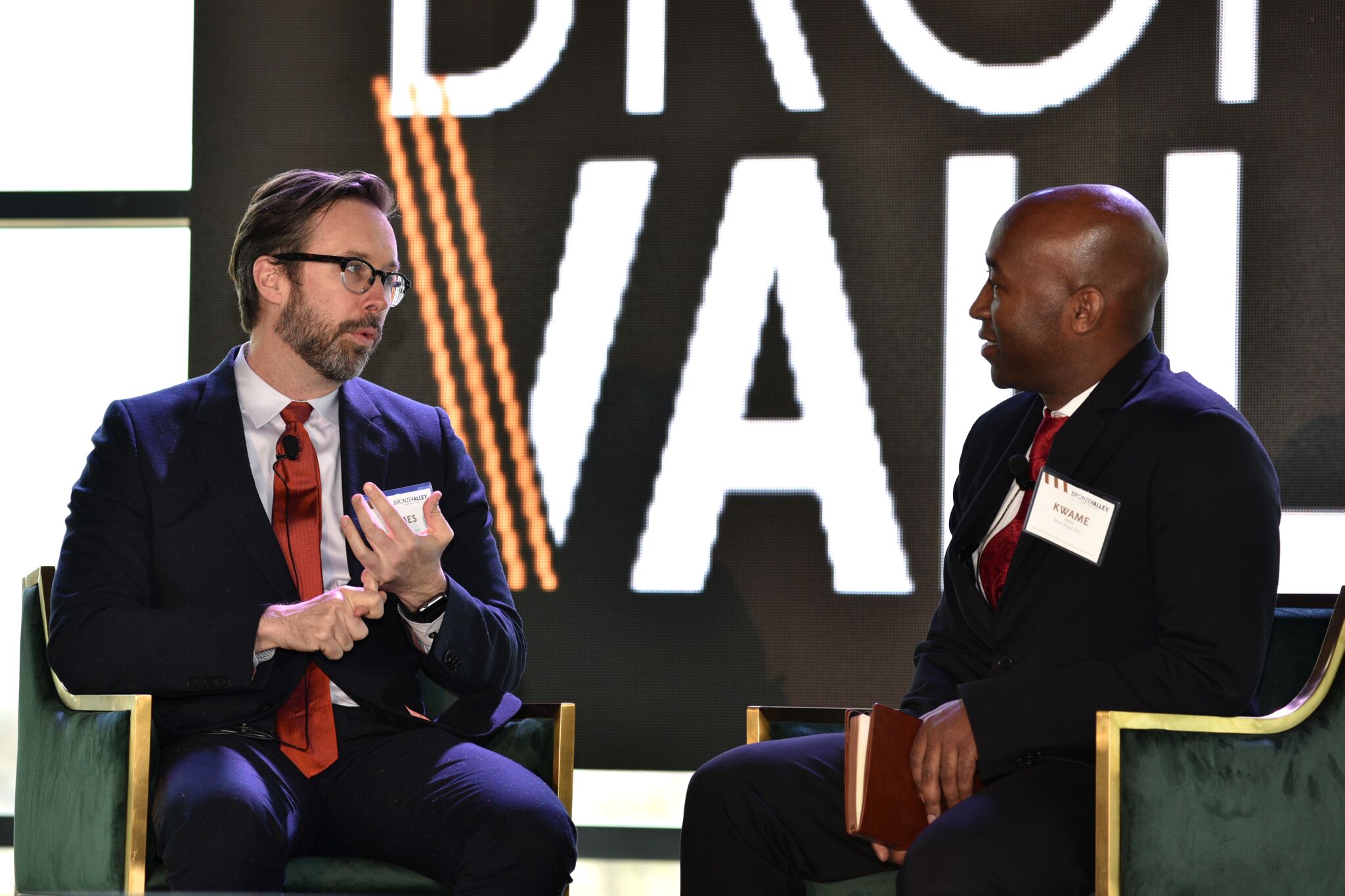 Where do corporations fit into the equation? Kwame Anku, co-founder and principal of Black Angel Tech Fund traveled from Sacramento to attend Bronze Valley on Feb. 14. He and James Heath, financial principal of Southern Company, took time to discuss how Southern Company is making strides and how other companies can too.

Anku began the conversation remembering when he approached Alabama Power about Yes We Code five years ago. Through Yes We Code, hundreds of thousands of children of color would be able to learn to code and become better prepared for the future. Upon sharing the concept with Alabama Power’s John Hudson at the time, Anku recalled the moment that Hudson understood their vision without having to see the program on paper, illustrating the power of corporate partnership and investment.

“I am very excited to see this community launch such an extraordinary vehicle,” said Anku as he addressed Bronze Valley conference attendees.

“The fund has been about three years in the making. Utilities are ripe for and need to prepare for disruption. Southern Company committed to be founder of the fund and now we have 13 utilities in the fund,” said Heath.

Anku continued, asking why it would make sense for a company like Southern Company to allocate funds to invest in venture. “Why is it important for corporations to be a part of a developing local tech sector?” Anku asked.

“It comes down to two areas for us, the first being financial – are we going to get a good return?” Heath explained. “Secondly, we want the investment to do well, but what does that mean to us and for our customers? What does it mean for growth in the state? We want to gain strategic insights.”

Heath continued with an example of the fund’s investment in Spark Fund, a company based out of Washington, D.C. “Spark Fund has built a subscription platform where customers can procure new energy services – lighting options, HVAC improvements, refrigeration upgrades, etc. They have made it easier for customers to adopt these new technologies and from our perspective, if those are available to our customers, we want to be a part of that platform.”

Anku and Heath turned the conversation to how CEOs and founders can be prepared prior to getting a deal.

“Understanding the market, who your customer is and how you will interact with them is crucial.  It is just as important as being recommended,” explained Heath. “CEOs need to be laser-focused on the customer. How are you continuing to engage with customers? How are you building yourself further into that market?”

Heath continued, addressing the value of knowing why one would want to partner with a fund.

“Know who your fund is. In our case, know why you want a utility fund. What is the benefit of having us as an investor? Be fairly clear why you want a potential investor,” explained Heath.

Anku and Heath continued the discussion focusing on sectors of tech and areas of the country seeing growth.

“What are other hot areas outside of the energy sector in tech?” asked Anku.

“Science technology is another area where you see a lot of excitement right now,” Heath answered.

“When you look around the country, where do you see other areas in the country that investing in those areas could be helpful? Certain areas that are doing complementary technology?” continued Anku.

“In some ways when you think about the early movers in energy tech, you think California and Hawaii. New York, parts of Texas, maybe the Midwest – those were early adopters of CTE and solar. We want to continue to look outside of that. Why would someone in Oklahoma, Alabama or Arizona want to adopt smart home technology? How are you framing the proposition for those geographies who haven’t been early adopters? That’s another area we are focusing on,” explained Heath.

Heath and Anku closed the conversation discussing how corporations investing in the VC space can invest in products and services that catalyze the need for their own products.

And finally, what about diversity in this sphere?