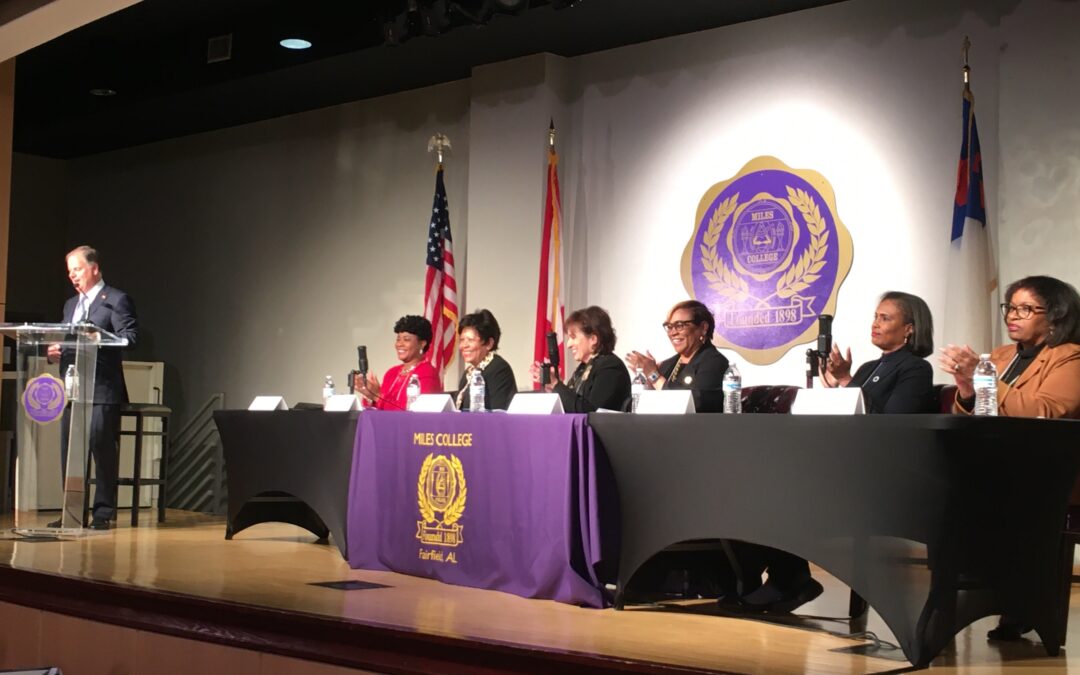 America’s historically black colleges and universities (HBCUs) currently serve well over 300,000 students. Alabama is home to 14 HBCUs with combined enrollment of more than 37,000, or about 12 percent of the national total; no state has more HBCUs and only North Carolina, with just under 40,000 students, has more enrolled in such institutions.

Assessing the present and future of Alabama’s HBCUs was the goal of a summit held February 14 at Miles College, in the Birmingham suburb of Fairfield. The event was the second annual summit — the first was held last year at Birmingham’s Lawson State Community College — hosted by U.S. Senator Doug Jones. While intended as “a celebration of HBCUs and the value they bring to higher education across our state and country,” the summit also highlighted the need to address ongoing issues relative to mission and roles in communities.

“This is an opportunity to showcase these institutions,” Jones said in his introductory remarks at Miles. “But we also know that, in Alabama and around the country, our HBCUs face some serious challenges. We need a frank discussion of that.”

The presidents panel began with a question about attracting and meeting the needs of non-traditional students. Mentioned in the responses were Gadsden State’s “E2” program, an education-to-employment initiative in partnership with a local foundation that assists with tuition, course materials, transportation, childcare and life coaching; and Troops to Teachers, a state-funded program operated by Stillman College that provides opportunities for second careers by training former members of the military to fill teaching vacancies in state schools.

Other questions touched on the challenges of building endowments and securing both financial and other types of support, the unique advantages and obstacles confronting women leaders of higher education and the future of HBCUs in an evolving educational environment. The questions prompted the “frank discussion” Jones was aiming for, including the following highlights:

From Miles Interim President Knight: “Meeting the challenges HBCUs face in funding is a marathon, not a sprint. It requires raising money, but it also requires looking at paths beyond traditional fundraising. It means working with community colleges because we want their graduates to come and continue their education at Miles. And it means developing tracks that lead, for example, to medical schools, where we have fewer black males today than we did in 1970.”

From Gadsden State President Lavender: “You have to overcome certain perceptions. In the community college system, we have been assumed to be [fully] state-supported, but what we are is state-assisted.”

From Trenholm State Interim President Archie: “One benefit of HBCUs is having teachers who know your name and are dedicated to helping you achieve your best. We know what non-traditional students look like and what they can accomplish. And, thanks to our partnerships with businesses who need the graduates we’re producing, we’re learning things about changing the model of how we do education.”

From Drake State President Sims: “Life happens, and people have to delay opportunities for higher education. We get a lot of students who fall into that category, who are looking to skill up and enter the workforce quickly. And we have a need and an obligation to support those students in their objectives.”

From Tuskegee Chief of Staff Friar: “As women in leadership, we have to pave our own way. We’ve learned that you have to develop networks to support and reinforce each other and share experiences that help you make good decisions and move strategically to address issues and opportunities.”

From Stillman President Warrick: “Education is changing whether we like it or not. We have to work collaboratively to make sure we’re meeting needs, preparing students for careers and eliminating barriers. There are many ways to do that in addition to dollars, including being smart about how we leverage partnerships.”

The afternoon panel was “Student Voices: How Alabama HBCU Student Leaders are Lifting Up Their Campuses.” It featured student leaders Keila Lawrence of Miles, Jacoby Gray of Alabama A&M University, Erin Massey of Shelton State Community College, Amani Myers of Talladega College and Dakus Sankey Jr. of Trenholm State. The panel fielded questions from Jones on topics ranging from honoring and building on the traditions associated with HBCUs to the importance of community service as part of the educational process to the continued relevance of the HBCU experience.

“There is nothing else like the HBCU experience,” Lawrence said. “You get to know faculty and staff members like you can’t in other places and they’re able to invest more in you. And you get leadership opportunities that might not come your way elsewhere, which I think is invaluable.”

Responding to the question about building on traditions, Gray said he finds inspiration in the history of service at HBCUs and in the black community in general.

“Others before me,” Gray summed up the attitude he brings to student leadership. “It’s important to remember that people have served for us to be here. We have an obligation to carry that on and make sure it continues into the future.”

In conjunction with the summit, students had the opportunity to attend a career fair with more than 30 prospective employers from across Alabama represented. Among the companies onsite were Airbus, Amazon, Coca-Cola, Hyundai, Hudson Alpha, Southern Research, Steris, Toyota and Vulcan Materials, along with several banking and financial services firms.