Bronze Valley has added Greg Barker to its board of directors. Barker, recently named president of the Economic Development Partnership of Alabama (EDPA), was elected to the board at its May meeting.

“I am genuinely excited to be part of such a dynamic and mission-oriented board,” Barker said. “In the very short time since its founding, Bronze Valley has proved to be a valuable addition to efforts to make innovation and entrepreneurship a key component of Alabama’s economic future. I look forward to contributing to those efforts in every way I can.” 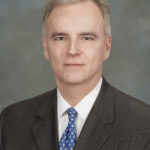 “The issues and challenges, as well as the opportunities, vary from place to place,” Barker observes. “The common thread for me has been the opportunity to work with teams and community leaders who are dedicated to excellence and understand the value of collaboration.”

Barker also serves on the board of Birmingham’s Innovation Depot, the Southeast’s largest startup incubator, one outgrowth of his passion for building the economy of the future. In 2015, he was a leader in establishing Alabama Power’s Innovation Team, which is devoted to developing opportunities to improve energy efficiency and connectivity to better serve customers and support economic development that benefits all Alabamians.

“Greg has been a good friend and trusted colleague for a long time,” said Bronze Valley Chairman John Hudson, whom Southern Company Gas recently appointed as president and CEO of Nicor Gas. “He is a tireless champion of technology entrepreneurship and economic transformation. That exemplifies the mission and objectives of Bronze Valley and makes Greg an outstanding addition to our board.”

Launched in 2017, Bronze Valley is working to create an education-to-opportunity-to-outcome pipeline for ethnic minorities and women in technology careers, the entrepreneurial ranks and other fields in which innovators will lead the way in creating the jobs of the future. In addition to providing access to capital, Bronze Valley’s efforts are concentrated on providing value-added services to entrepreneurs, aimed at outcomes that also help advance ongoing efforts in education and workforce development.