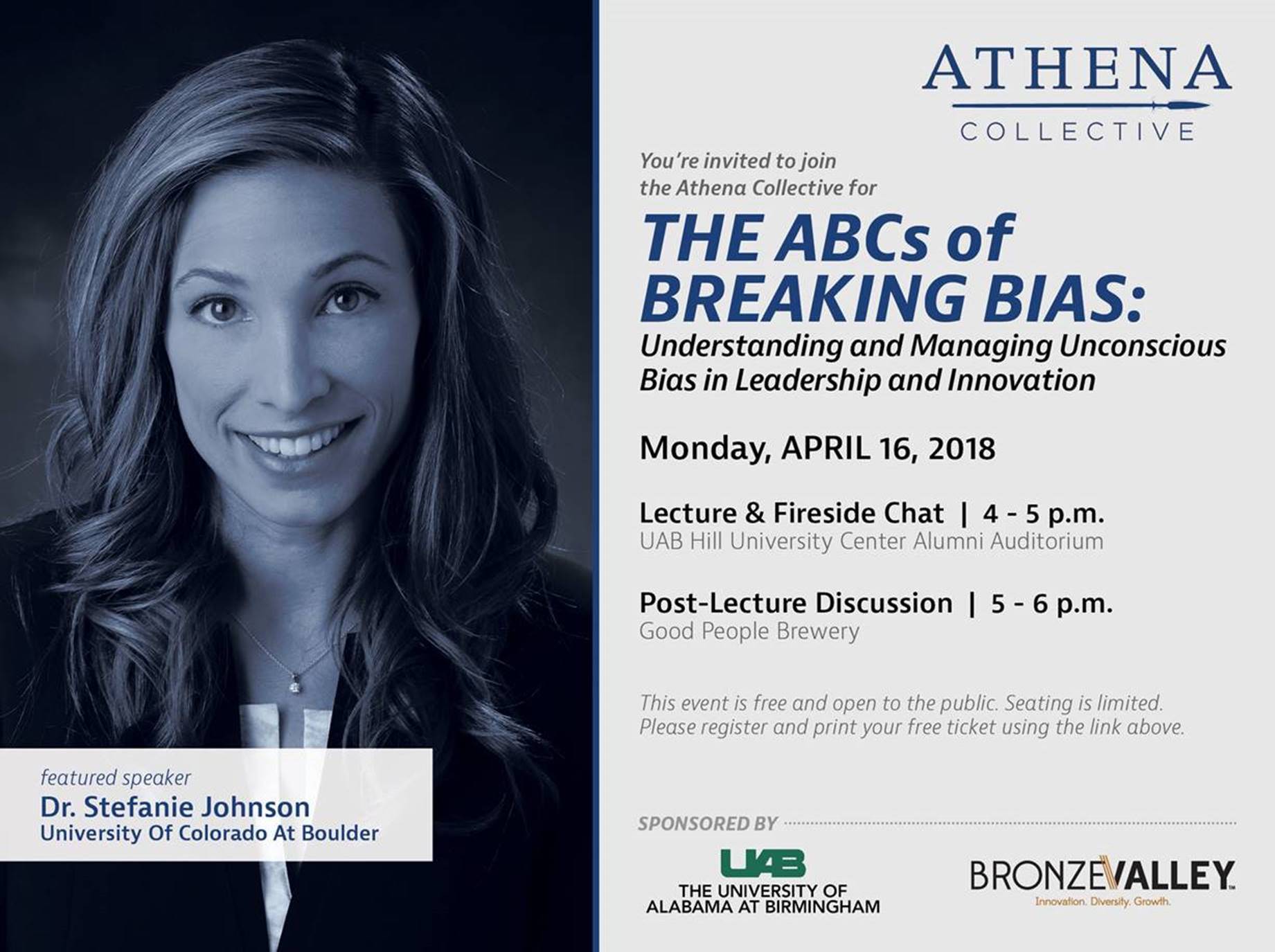 “There is a strong business case for diversity and inclusion,” says Dr. Stefanie Johnson. “For any organization, the question is not whether bias exists — it’s what you’re going to do about it. If your objective is to hire the best people and your entire organization supports that, then you’re going to have a diversity of thought and perspective that will result in better outcomes.

An associate professor of management at the University of Colorado at Boulder’s Leeds School of Business, Johnson has spent two decades studying the relationship of leadership and diversity, including the effects of unconscious bias on organizations. A sought-after leadership development consultant, she’ll share her expertise with a Birmingham audience on Monday, April 16, in a lecture titled “The ABCs of Breaking Bias: Understanding and Managing Unconscious Bias in Leadership and Innovation.”

Johnson’s lecture is being presented by the Athena Collective, a group that provides training, support and a point of connection for women in Birmingham’s business and entrepreneurial ranks. The event, at the University of Alabama at Birmingham’s Hill University Center, is free to the public, as is a post-lecture panel discussion that will be held immediately afterward at Good People Brewing Company.

“This is a passion project for us,” says Whitney Wright, co-founder of the Athena Collective and director of investor relations at Cook & Bynum Capital Management. “Birmingham has a tremendous opportunity right now, as we’re beginning to see the emergence of an innovation economy. As that happens, we’re trying to be a catalyst for inclusive economic growth, to make sure that’s part of the DNA from the get-go.

“That’s important if we want entrepreneurs and investors to recognize Birmingham as a place where ideas can flourish and companies can grow.”

The event is being sponsored by UAB and Bronze Valley, an organization launched in February with the mission of creating an education-to-opportunity-to-outcome pipeline for those currently underrepresented in technology careers, as entrepreneurs and in other fields where innovators will lead the way in creating the jobs of the future. Neill Wright, executive director of Bronze Valley, says the “Breaking Bias” message complements his organization’s mission and objectives.

“In Birmingham and across the country,” says Wright, “there is a need to create an environment for innovation that is more nurturing, more supportive and more inclusive. We recognize that the more diverse and the more open our business community is, the higher the degree of success we can achieve.”

Emily Wykle, organizational development manager at UAB, notes the university’s commitment to inclusion is reflected in part by the fact that its student body — as well as the faculty and staff — rates as one of the most diverse in the United States. She says sponsoring events like “Breaking Bias” is important in terms of management and leadership development, particularly to the extent that they help deepen the local conversation around the issue at hand.

“We’re at a place where people want to talk about diversity and inclusion,” Wykle says. “This event provides a platform that allows and encourages that. Our hope is that the people who attend will want to share their experiences and their struggles with these issues, and that they’ll be open to learning something new about where Birmingham is as a community and what we can do about them.”

“The ABCs of Breaking Bias” is scheduled for Monday, April 16. Dr. Stefanie Johnson’s lecture will begin at 4 p.m. at the UAB Hill University Center’s Alumni Auditorium, located at 1400 University Blvd. The post-lecture discussion will take place from 5-6 p.m. at Good People Brewery, at 114 14th Street South.

The event is free and open to the public. Seating is limited. Those interested in attending can register and print their tickets by following this link.